In late March, my PI suggested that I attend a course about Cryo-EM and offered a few suggestions. I talked with several lab mates who had attended such courses and ultimately chose the Brazil School, mostly due to the focus on single particle analysis, the small class size, and proposed highly interactive atmosphere.

Channeling my inner Bear Grylls I chose to bypass the suggested vaccinations and armed with my suitcase, my laptop (no power converter needed for Brazil!), and visa affixed to my American passport, I said my goodbyes on a sunny Tuesday afternoon and embarked upon my journey from La Jolla to São Paulo.

After 16 hrs of travel and several time-defying meals on overnight flight, we arrived to Brazil transformed from what would have been Tuesday summer evening to the following Wednesday morning in the middle of winter. My lab mate and I tentatively made our way through the imposing brutalist poured concrete terminal to a small coffee stand where we quickly learned an important lesson: English is not spoken here. After a vaguely comical exchange we sat at our table, sipping hard-won cappuccinos (which were inexplicably full of chocolate) to wait for two other course participants who arrived on a later flight. At seven, we all congregated with our lovely Portuguese-Speaking chauffeur and through a series of complex gesticulations we made it into a van, where, after a pleasant (albeit quite bumpy) hour and a half, we found ourselves in the idyllic village of Socorro. 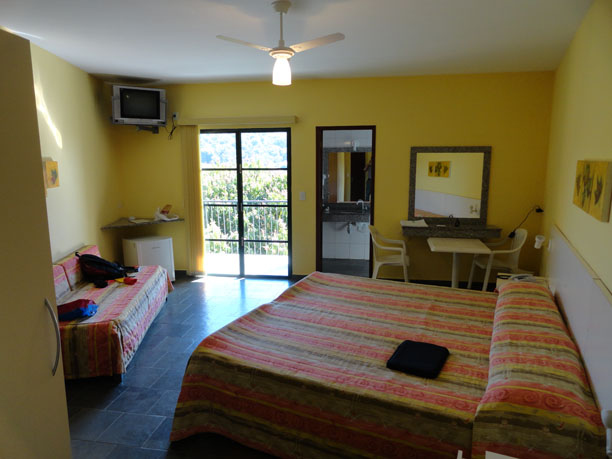 Our suitcases bumped along a cobblestone path as we made our way to our rooms of the Grinberg's Village Hotel. A bright open foyer led us to our rooms. Inside the room, which I shared with one other girl, sat two beds, a small sofa, and a set of chairs beside two tables which could easily be used as desks. On the right, a door led to a private bath and on the left French doors opened up to a patio where the wind softly rustled through a rush of varied green foliage and cows peacefully grazed on the rolling grass covered hills that defined the horizon.

On a typical day after a breakfast of fresh fruits and various pastries, we would follow another path, often times littered with yellow flowers from a nearby tree, through a trellis of large ferns to a single-roomed building where tables were neatly arranged, accommodate the ~25 students and ~10 organizers/instructors. After a short light-hearted overview of the impending lectures and activities for the day, we would have the first three and a half hour block of lectures, punctuated by a coffee break with provided cakes, tea, and coffee. At one we broke for lunch (which was always a hot and a cold buffet of typical Brazilian cuisine) and afterwards had several hours to either catch up on class-work or unwind and enjoy Brazil: either relaxing by the pool, playing soccer with the other students, venturing down into the town of Socorro for sight seeing or a cup of fresh caldo de caña, or participating in one of several planned afternoon activities. We'd reconvene at five and until eight for an interactive hands-on session, followed by a series of talks where the students presented their own research. We'd wrap up the lectures with a summary of the day and any proposed informal evening activities, which included, for example, trips to local bars or botecos, caipiriñha nights at the hotel pool, or simply an evening in the game room where we could challenge our fellow course participants (or even sometimes the hotel staff!) to a friendly game of foosball, billiards, ping pong or truco). 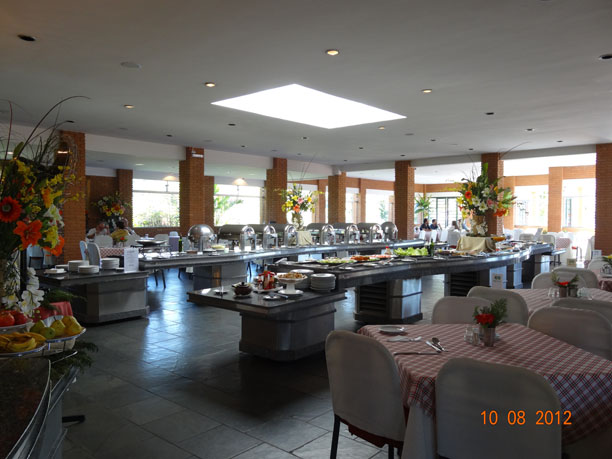 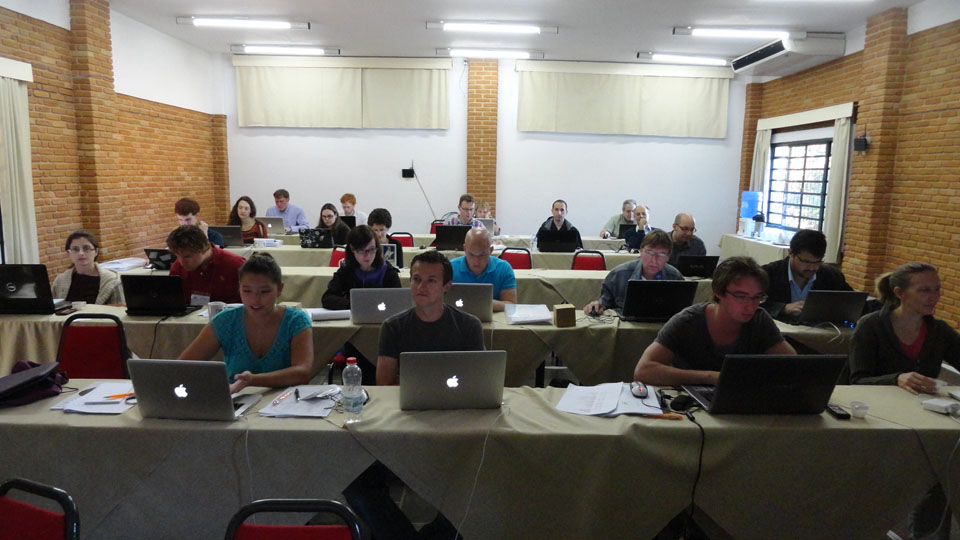 The setup of the instruction was well-planned and for me incredibly effective. The morning lectures were power point presentations that would normally present a topic and then go into the relevant development and theory. The afternoon hands-on during which we had a tutorial to follow as well as the constant guidance and assistance of several instructors, focused mostly on the IMAGIC processing suite, and were centered around the same topic as the lecture, except now the objective was the actual application and each student worked individually on his or her own laptop. The progression was very logical: the first lectures were about Fourier transforms and CTF correction, and in the hands-on sessions we started processing the raw micrographs. Next, alignments and classifications, initial models, reconstructions, and validation methods were covered. By the end of two weeks we had each transformed our micrographs into our own personal 3D reconstruction map of worm hemoglobin, which we learned to explore further with programs such as Chimera and Cinema 4D. 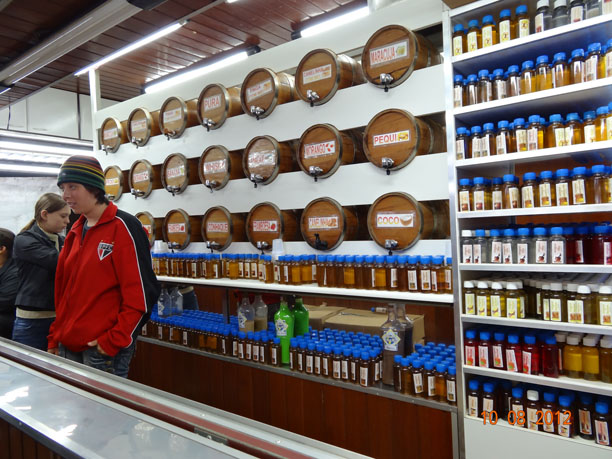 I've been studying electron microscopy for about a year, but one thing I thought was particularly cool about this course was the fact that participants came with very different levels of exposure to and understanding of EM, yet somehow the course catered to everyone. Some had been studying and using EM for several years and took the course to really hone their skills and get a more rigorous understanding, whereas others had almost no background in EM at all but realized its potential in a hybrid methods scheme and hoped to learn the basics and implement the technique into their own research. This varied range of knowledge fostered a comfortable atmosphere where there was no question too basic nor too technical. For those still a bit shy, the hands-on sessions gave ample opportunity to casually ask a lecturer specific questions. Additionally, the organizers and lectures participated alongside us in the free-time activities and the meals, so what better way to clarify a concept or extend a discussion than over a cup of beer at the pool, a delicious plate of feijoada in the cafeteria, or while white water rafting on the Rio do Peixe? (Okay. That last one might be a bit of a stretch to still be focusing on image processing questions while rafting, but still entirely possible!)

I think this type of integration was really quite essential to the course: by the end you're not thinking in terms of organizers and participants, but indeed you're thinking more of the others as friends, as by the end of the twelve days you've spent so much time together in both an educational and recreational environment. I certainly felt like this by the end of the course. I was more comfortable with image processing and better at trouble-shooting as I obtained a much more solid theoretical background, but also I was exposed to many concepts and applications I otherwise wouldn't have encountered based on the interaction and discussion with the course participants and lecturers.

Check out the interviews with course participants below!